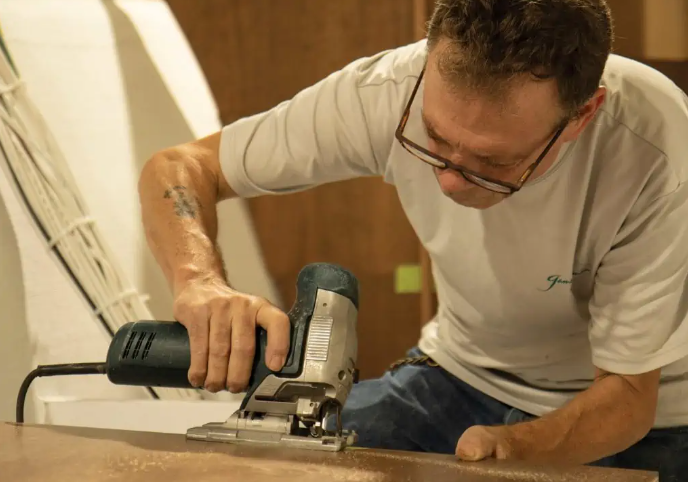 Gamefisherman Featured in Marlin Magazine: Men Behind the Build

An excerpt of an article recently written by Cameron J. Rhodes of Marlin Magazine:

“Unless you’ve dabbled in crime, you probably don’t spend much time thinking about fingerprints. When you see those signature rings on a lens, screen, or ­section of ­varnished teak, you’ll likely wipe them away without a second thought. On the other hand, some fingerprints—those that aren’t so literal—cannot be removed with just a swipe of a rag. They last forever.

Even though you can’t see them, boatbuilders’ ­fingerprints are etched into every inch of the hull, right alongside the blood, sweat and even the tears of those very same craftsmen. Hundreds of hands are responsible for building a sport-fishing boat from conception to realization. If you do the math, you can easily expect around a thousand years’ worth of experience, talent and artistry behind every new boat. For successful boatbuilding operations such as Gamefisherman, Michael Rybovich & Sons and Jarrett Bay Boatworks, it’s a requirement to have the crew stacked with hardworking professionals with various skillsets. Depth is important on any team, and although each builder boasts a long list of employees with diverse backgrounds and trades, a few stand out as exemplary leaders in the pipeline.

Long before Jeff Adams was born, his fate was decided on the cloudy shores of England. There his ancestors built wooden boats, the very vessels that would apparently inspire a long line of familial boatbuilding craftsmen, a skill that would ­eventually leap the pond to North America.

A South Florida native who’s been ­building boats professionally for 35 years, Adams really doesn’t know the history of his English relatives. His sister only recently found out after taking a genealogy test that the family bloodlines trace back to English boatbuilders. While boatbuilding may well be in his blood from as long as centuries ago, he learned the trade from someone much closer to home.

Indeed, boatbuilding is a family tradition. Born in Nova Scotia, Adams’ grandfather Charlie Adams taught Jeff’s uncle Bud how to build boats, who in turn went on to teach him the craft. “My uncle Bud Adams was a very focused and ­detail-oriented ­person,” he says. “He was a gentle spirit, and I couldn’t have had a better teacher. When I asked him about what it was like to work with my grandfather, however, he replied, ‘There were some days that you just couldn’t do anything right.’” Adams doesn’t know who taught his grandfather; he never got the chance to ask his uncle about it before he passed away. And even if that bit of history is lost from the records, Adams’ skills are proof alone that his blood runs thick with boatbuilding prowess.

Adams has been working for Gamefisherman, now owned by Release Boatworks, for 12 years. Before that, he worked for his uncle at Adams Boatbuilding, American Custom Yachts and Rybovich. Throughout his career, he’s established himself as a creative problem solver when tackling custom builds. “We count on Jeff to come up with solutions to typical problems that tend to frustrate most boatbuilders,” says Release Boatworks general manager, Jim Turner. “He uses his expert knowledge and skill to keep these projects on course.”

Officially, Adams is a carpenter. That said, he’s had his hands in many aspects of the process. Whether building the hull, perfecting teak covering boards, or cutting out transom doors, he carefully considers every detail of the task, a practice he undoubtedly picked up from his uncle. Attention to detail matters in boatbuilding, especially when working to please the customer footing the bill. “When a customer walks on his boat for the first time, the first things he sees are the covering boards and the joints,” Adams says. “They need to be lined up perfectly and look beautiful. It’s important to wow the customer with the first impression.”

As it turns out, this kind of work, also known as joinery—the process of joining pieces of wood together—is the part of boatbuilding that Adams likes most, and is also one of his greatest strengths. “Some of Jeff’s greatest skills are his historical woodworking capabilities,” Turner explains. “He has the ability to work consistently and patiently to achieve the finest joinery in the industry.”

Adams will always have great love and ­appreciation for wood boats. The transition to fiberglass has been challenging for the seasoned craftsman, but he understands the perks of such materials. At the end of the day, he’s proud to be working in the boatbuilding industry, and is glad to be able to work alongside his peers to produce these exceptional boats. “There is a great team of builders who really shine here,” Adams says, “and everyone is so nice to work with.”