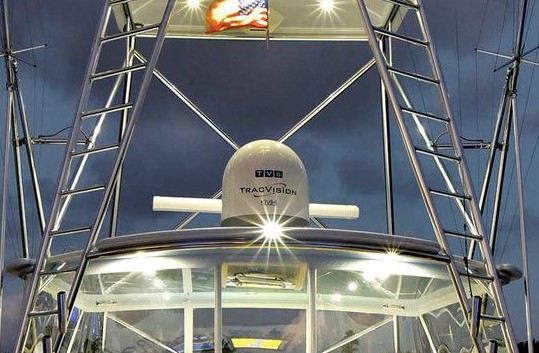 People hear the word “radiation” and it freaks them out – and rightfully so. I can’t tell you how many times I’ve heard a captain, mate, or owner talk about staying away from a working radar with fear of turning brains into “scrambled eggs”, and have even heard people say they get a headache if they get too close.

We did some research to find an answer to the ever-debated question once and for all: is marine radar hazardous to your health?

Short answer: According to the World Health Organization (WHO), not really – it’s all in your head (pun intended). To produce health defects, exposure would be 1000 W/m2 or more, and marine radars on pleasure boats don’t reach more than 10 W/m2. You would also have to stand directly in front of the very narrow beam for a significant amount of time, and that’s impossible while it’s spinning.

“People hear the word radiation and it scares them because we’re sending out a little blip of energy and it’s energy that’s coming home,” says Eric Kunz, senior product manager for Furuno USA. “But it’s not the same kind of energy. Nuclear radiation is associated with change in the biological structure of a cell.”

Long answer: Absorption of radio frequency (RF) fields in tissues is measured by Specific Absorption Rate (SAR). An SAR of at least 4 W/kg is needed to produce known adverse health effects in people exposed to RF fields in this frequency range.

Peak powers of marine radars can reach up to 30 kW, with average powers ranging from 1 to 25 W. Under normal operating conditions, with the antenna rotating, the average power density of the higher power systems within a metre of the antenna is usually less than 10 W/m2. In accessible areas on most watercraft, these levels would fall to a few percent of present public RF exposure standards.

Also keep in mind, radars send electromagnetic waves in pulses (not continuously), and they are directional and very narrow like the beam of a spot light (RF levels fall off rapidly outside of that main beam), meaning this makes the average power emitted much lower than the peak pulse power.

“Uninformed boaters often equate a marine radar with a microwave oven, and their body as a frozen bean burrito,” says Jim McGowan, marketing manager for the Americas for Raymarine. “It’s true that both systems use microwave energy, and generate that energy using a device called a magnetron. For comparison purposes, most microwave ovens range in power output from 0.8 kilowatt (800 watts) to 1 kilowatt. The burrito analogy doesn’t hold up though because of a fundamental difference in the way a microwave oven works versus a marine radar. In order to heat your burrito, from the inside out no less, a microwave uses continuous-wave microwave energy. That means its magnetron is on and hammering away with 1 kilowatt of energy for its entire cook cycle. The microwave energy actually excites the molecules in the food, causing them to move faster and generate heat. This is what warms the food. The longer the exposure to the continuous-wave energy, the faster the molecules go and the hotter it gets.” That sounds unpleasant, to be cooked from the inside. But it doesn’t happen to boaters.

“The magnetron marine radar works differently in that it uses pulsed microwave energy,” McGowan says. “That is, the radar scanner actually turns itself on and off thousands of times a second. It does this so it can send a pulse, then listen for its faint echo returning. Depending on the range selected, the radar’s pulse could be short, long, or somewhere in between. But, even with a long pulse, the radar is only actually radiating for a few thousandths of a second at a time. Because of that constant on/off effect, the marine radar never generates power long enough to get the molecules moving in whatever objects are in the path of its beam. No heat means no cooking, burritos or otherwise.”

Consensus: You’re more likely to be hit by a spinning radar than fried by one.

Jokes aside, everyone has their own beliefs and superstitions, so use radar at your own risk and do your own research on the specific model you run, but please don’t be “that guy” still spinning at the dock.

For updated and more in-depth information about how marine radar could effect your health, visit the World Health Organization’s website here: https://www.who.int/news-room/q-a-detail/radiation-radar#:~:text=Marine%20radars%20can%20be%20found,to%20large%20ocean%20going%20vessels.&text=Speed%20control%20radars%20are%20hand,close%20proximity%20to%20the%20body.

Thank you to Jason Y. Wood of Power and Motoryacht for the quotes above.