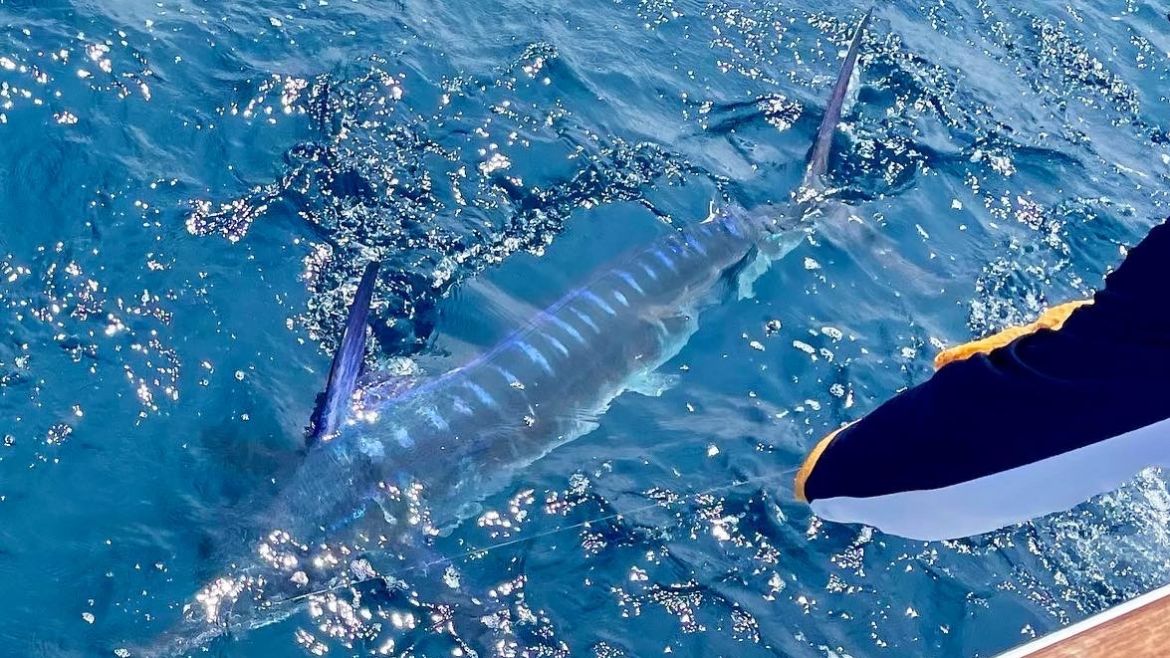 Expectations were high going into Day 1 & the fleet did not disappoint! Participants delivered an ACTION-PACKED week with 8 blue marlin appearances & 226 billfish releases! MERCENARIA claimed the top prize of $3,489,813, an industry record after securing $777,750 in the Fabulous Fishermans division + the Super 20 division worth $1,156,000 for the 572.6lb. fish caught on Day 1 of the tournament.

For the second year in a row, the last white marlin weighed netted a world record purse.  In 2021, “Sushi” out of Ocean City, MD took the top white marlin at the last minute, and at the time collected (a then world record payout) of $3,200,000 for catching a fish.  That record payout lasted just 10 months when angler Matthew Brown fishing aboard the “Mercenaria” in the 2022 Big Rock tournament out of Morehead City, NC weighed a 572.6-pound blue marlin and won $3,489,813.

During this year’s White Marlin Open (as they would say in fishing parlance), the billfishing was lousy.  In 2016, 1445 billfish were caught, while the 2019 event saw a total of 1,504 billfish taken.  But this year, the marlin were AWOL for most boats.  A total of just 155 whites were caught with 151 released while 58 of the 59 blue marlin caught were released.  And no marlin was even weighed until Thursday.

On day four, the “Cabana,” out of Fenwick Island, DE, arrived at the scales with a 511-pound blue marlin.  The blue was taken by Bill Britt from Sandy Spring, MD, to take first place as the only qualifier in that division.  That fish held on until the end and Britt was awarded $1,208,420 for his efforts.

Thursday also saw the “C- Student” out of Southside Place, TX, weigh a 71.5-pound white marlin good for first place and a temporary grasp of $2,800,000 for angler Keeley Megarity from Houston, TX.  The “C- Student” wasn’t as lucky as the “Cabana” because on the final day at 6:20 PM, the “Billfisher” out of Ocean City, MD pulled up to the scale and Jeremy Duffie from Bethesda, MD turned the leaderboard upside down by weighing a 77.5-pound white marlin moving him into first place.  The “Billfisher” was across the board with all the added entry skill levels and reclaimed the title for the largest price ever paid for catching a fish: a staggering $4,536,000.  Duffie’s fish took almost $2,000,000 from the “C- Student” leaving them with a still respectable $197,000 for their 2nd place white.

The wahoo division saw approximately $74,000 split among the “Jenny Poo” out of Palm Beach, FL which took $24,566.00 for a 71-pounder caught by Chris Thompson from Mount Airy, MD.  $23,566 was awarded to Hans Mulford from Seaford, DE fishing on the “Water Marlin” out of Seaford, DE for their 54-pounder.  Third place wahoo was a 51-pounder taken by Patrick Brown from Miami, FL aboard the “Irish Twin” winning $22,566 for his effort.

The ”Irene” out of Stuart, FL took first place in the dolphin division with a huge 59.5-pound fish caught by Frank Sinito Jr from Cleveland, OH who earned $31,297.  It was the 29-pounder taken aboard the “10-4 Joker” out of Chincoteague, VA that earned the biggest dolphin payday.  Because they were also in the small boat heavy dolphin added entry, Vernon Merritt Jr. also from Chincoteague, VA netted $104,447 for his efforts.  The 28-pound dolphin caught off the “JEB” out of Ocean City, MD earned $28,297 for Lutherville, MD native Vince Piccinini.

The most prestigious categories in the WMO are unseen.  They are for the boats and anglers that release the most billfish during the event.

The Top Female Anglers in the 2022 WMO were:

It was bound to happen. Day Five at the MidAtlantic has a history of dramatic finishes and 2022 would be no different. Many a crewmember has spent the night before the final day of the tournament tossing and turning as they nervously await the end of the final day of fishing. Way back in 1997 the phrase “Moving Day” was first used for Day Five at this event because of the big changes that occur to the leaderboard. Fortunes have been made and dashed over the years and 2022 would be no different as Day Five saw several major changes and a new tournament record set as well! The final day of fishing saw the largest fleet of the week head offshore as 160 boats had Day Five of the tournament left to fish and hopefully get a piece of the tournament’s $5.23 million purse.

Going into the final day of fishing Michael Jordan’s Jupiter, Florida-based Catch 23 sat atop the leaderboard in the white marlin category with his 73-pounder followed by Vero Beach, Florida’s Matthew Weber aboard his Max Bet with a 65 pounder. The tournament fleet, including Jordan and Weber, both veterans of this event, knew those two fish were beatable and although the numbers of white marlin caught grew as the week wore on, finding one to meet the 69-inch, 65-pound minimum was proving to be difficult. As the weigh-in session got underway word began to leak out of boated white marlin of significant length that could potentially shake up the leaderboard. The sun was beginning to set as Captain Steve Castellini backed the Kaarmaa of Millstone, New Jersey’s Anthony Alves to the scale at Canyon Club Resort Marina in Cape May with a white marlin to weigh for Alves who was also the angler. As the billfish was hoisted from the boat it was clear this fish was going to challenge the top two fish on the board. After taking the measurement the marlin was hoisted to the scale and Weighmaster Chris Booth confirmed the weight of 75 pounds to put Kaarmaa in the lead of the category. However, word began to spread of another white marlin coming to Cape May and just 30 minutes later Captain Michael Pintozzi of Langhorne, Pennsylvania pulled up to the scale with his Random Chaos to weigh a white marlin for angler Tom Jarvis. As the crowd of tournament participants looked on the billfish was placed on the scale and the weight of 66 pounds was announced to put Random Chaos in third place. In the end Kaarmaa’s 75-pounder took the top spot in the category and won $871,404. Catch 23’s 73-pounder caught on Day Three was second and received $693,615 while Random Chaos held on to third place and won $192,165.

The blue marlin category was hotly contested all week long and the 56 blues caught is the second highest in the tournament’s tenure topped only by the 68 blues caught in 2019. As has been the case in several Day Five’s at the MidAtlantic over the years, darkness would cover Canyon Club Resort Marina as a blue marlin would be weighed and this year it would be the final fish weighed in the tournament. The Avalon, New Jersey-based Low Profile of Captain Joe Trainor had a blue marlin on the deck that taped out at 122¾” which angler Ken Wibble battled for well over three hours before being boated. As the huge billfish was hoisted to the scale and positioned you could hear a pin drop and moments later the weight of 657 pounds was announced by Weighmaster Chris Booth. Low Profile took home $576,209 for the heaviest blue marlin while Robert Boyce of Key Largo, Florida finished in second place aboard his Lucky 7 and won $168,625 for his 619-pounder caught on Day Four. Christopher Kinsley of Seven Valleys, Pennsylvania aboard his Kilo Charlie took third place and received $580,119 for his 607-pounder caught on Day Three. Worthy of note for the second consecutive year the top three blue marlin in the tournament were all over 600 pounds.

The tuna category was another competitive category as no less than 86 of that species were weighed. Although yellowfins were plentiful, big eyes were scarce and only three were weighed during the week and none of the tuna weighed on Day Five made a run at the leaders. Art Boykin of Berlin, Maryland aboard his Lucky Duck took the top prize of $290,050 in the category with a big eye of 210 pounds caught on Day Four. For the second consecutive year a boat would win two places in the category and this year it was Summit, New Jersey’s Bob Hugin aboard his The Right Place who took second and third place with big eyes of 193 and 152 pounds caught on Day One and won a total of $793,014 for both places.

The wahoo division saw a complete overhaul of the category on Day Five and the top prize of $65,729 went to Plantation, Florida’s Charles Phelan aboard his Special Situation for a tournament record 104-pounder which breaks the previous tournament record of 97 pounds set by Bill Gallo aboard his Joanna back in 2009. Second place went to Keith Boyd of Ivyland, Pennsylvania aboard his Craftsmanship with a 72-pounder worth $57,528. Third place and $14,570 goes to Mike Penza of North Palm Beach, Florida aboard his Oil Slick for a 46-pounder.

The dolphin category saw Fort Pierce, Florida’s Joseph Valentine aboard his Valentine win $78,231 for a 43- pounder caught on Day Four. Billy Wrede of Randolph, New Jersey aboard Lovin’ Life finished second with a 39- pounder and won $34,874, also caught on Day Four. Donnie White of Pottstown, Pennsylvania aboard his Sea Wolf finished in third place with a 33-pound dolphin weighed on Day Five and won $24,722.

Note that cash payouts vary by the level of calcuttas a participant enters.

THE FOLLOWING RECEIVED CALCUTTA WINNINGS FOR VARIOUS POSITIONS ON THE LEADERBOARD DURING THE TOURNAMENT:

For further information contact Tournament Director Aaron Hoffman at 609-884-0177 or visit the tournament’s web site at www.themidatlantic.com where you’ll find all the facts, figures and information about this year’s event including a complete rundown of calcutta payouts, rules, points, and an event schedule. On social media follow the MidAtlantic on Facebook at The MidAtlantic Tournament; on Twitter @midatl and on Instagram @themidatlantictournament.